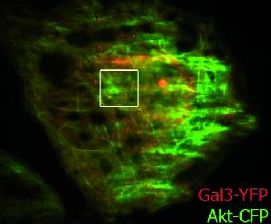 Epithelial cells, which control the exchange of substances between the organism and the outside world, are equipped with highly specific mechanisms for selective transport of substances to the apical or basolateral membrane. Using TIRF microscopy, scientists have been able to take a closer look at intracellular transport processes with the example of the galactose-binding protein Galectin-3, which has been identified as a potential apical sorting receptor.

As polarized cells, epithelial cells have clearly separated functional domains for selectively regulating the exchange of substances with the outside world and, at the same time, protecting the organism from harmful influences: the apical (facing the lumen) and the basolateral membrane. The enterocytes of the small intestine also have a highly complex system of sorting and transport mechanisms which are used, for example, to channel digestive enzymes out of the cell and nutrients into the cell via the apical membrane. Many details of polarized protein transport are still unclear. Malfunctioning of these processes may lead to intolerances or metabolic disorders. Cystic fibrosis, for example, is caused in some cases by a genetic defect in the apical transport of osmotically effective chloride ions from epithelial cells. The consequence is the secretion of mucus in the lungs, pancreas and small intestine, among other places.

The starting point of the intracellular transport is the trans-Golgi network (TGN), which supplies functional glycoproteins (e.g. hormones, digestive enzymes) in vesicles. The apical protein transport probably works in two main ways: through the association with specific membrane microdomains called lipid rafts, and via a raft-independent form of transport. Sorting signals in the protein structure and corresponding receptor proteins could make sure, on the one hand, that vesicles are charged with apical proteins and, on the other, that the secretory vesicles are channeled into the right transport path. Professor Ralf Jacob and his study group at the Institute of Cytobiology and Cytopathology of the Philipps University in Marburg, Germany, have identified the galactose-binding protein Galectin-3 (Gal-3), which could act as sorting receptor [1, 2]. It seems to be important for apical transport that Gal-3 forms clusters of high molecular weight with apical-sorted proteins – packing its cargo into the largest parcels possible, so to speak. A current study recently examined COS cells to explore the intracellular localization of Gal-3 in the secretion pathway and the structures involved in its exo- and endocytosis.

Fig. 1: Possible fusion of a Gal-3 vesicle with the plasma membrane:
A – Overview image with epifluorescence
B – Overview image with TIRF, 25 s after the beginning of the event
C – Time sequence of section of TIRF image; time given in seconds
A Gal3-YFP vesicle fuses with the membrane and discharges its contents. Further event at 120 s (normal arrow). After the event, a Gal3-YFP-free space is left (curved arrow at 125 s).
Scale of overview images: 20 µm; image section: 5 µm; penetration depth TIRF: 110 nm.

To visualize these processes, the Marburg scientists use TIRF microscopy (Total Internal Reflection Fluorescence). The combination of high z resolution and fast frame rate offered by TIRF microscopy enables a far better image to be obtained of dynamic processes in or near to the cell membrane than with epifluorescence (Figures 1, 2). TIRF is able to selectively excite fluorophores in an aqueous or cellular environment at a depth between 70–300 nm below the surface. The quality of the results depends on the precise setting of the TIRF angle and the exact positioning of the laser beam. Leica Microsystems’ scanner-sensor technology automatically matches the TIRF angle to the desired penetration depth at all wavelengths and positions the laser in such a way that the TIRF penetration depth automatically remains constant even when the wavelength is changed. Selected settings can be reproduced at the press of a button.

Fig. 2: Transport of Gal-3 vesicles close to the membrane along actin filaments
A – Overview image with epifluorescence
B – Overview image with TIRF, labeled section is shown in C
C – Time sequence of section of TIRF; time given in seconds
A Gal3-YFP vesicle close to the membrane (arrow) is first transported along an actin filament (from the bottom upwards), switches to another filament (88 s), moves to the left (109 s), is transported to the right again, switches filament again and is then transported upwards (246 s).
YFP – red; CFP – green; scale of overview images: 20 µm; section: 6 µm; penetration depth TIRF: 110 nm.

All in all, the results of the Gal-3 studies in COS cells paint a largely coherent picture of intracellular transport (Figure 3). The first contact between Gal-3 and the glycoproteins it sorts presumably takes place in a still unidentified post-Golgi compartment. By manipulating the pH, it was possible for the first time to localise YFP-labeled Gal-3 in endosomal compartments which are probably EEs (early endosomes) or REs (recycling endosomes) and which are discussed as the possible location of post-Golgi sorting. The vesicles formed by budding could then be transported via microtubules and then switch to actin microfilaments (Figure 2) in the vicinity of the membrane. After fusion of the vesicles with the membrane, the apical glycoproteins sorted by Gal-3 have reached their destination and are distributed together with Gal-3 in the membrane. However, a different mechanism seems to be responsible for transporting Gal-3 into the inside the cell interior. Whereas Gal-3 is important for the apical transport of non-raft-associated proteins, the endocytosis of Gal-3 is probably raft-dependent. Gal-3 could then be transported into the inside of the cell via actin filaments in order to rejoin the raft-independent transport.