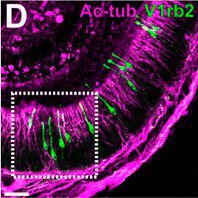 Peter Karlson and Martin Lüscher used the term pheromone for the first time in 1959 to describe chemicals used for intra-species communication. Pheromones are volatile or non-volatile short-lived molecules secreted and/or contained in biological fluids, such as urine, a liquid known to be a main source of pheromones. Pheromonal communication is implicated in a variety of key animal modalities such as kin interactions, hierarchical organisations3 and sexual interactions and are consequently directly correlated with the survival of a given species. In mice, the ability to detect pheromones is principally mediated by the vomeronasal organ (VNO), a paired structure located at the base of the nasal cavity, and enclosed in a cartilaginous capsule. Each VNO has a tubular shape with a lumen allowing the contact with the external chemical world. The sensory neuroepithelium is principally composed of vomeronasal bipolar sensory neurons (VSNs). Each VSN extends a single dendrite to the lumen ending in a large dendritic knob bearing up to 100 microvilli implicated in chemical detection. Numerous subpopulations of VSNs are present. They are differentiated by the chemoreceptor they express and thus possibly by the ligand(s) they recognize. Two main vomeronasal receptor families, V1Rs and V2Rs, are composed respectively by 240 and 120 members and are expressed in separate layers of the neuroepithelium. Olfactory receptors (ORs) and formyl peptide receptors (FPRs) are also expressed in VSNs.

Whether or not these neuronal subpopulations use the same downstream signalling pathway for sensing pheromones is unknown. Despite a major role played by a calcium-permeable channel (TRPC2) present in the microvilli of mature neurons TRPC2 independent transduction channels have been suggested. Due to the high number of neuronal subpopulations and the peculiar morphology of the organ, pharmacological and physiological investigations of the signalling elements present in the VNO are complex.

Here, we present an acute tissue slice preparation of the mouse VNO for performing calcium imaging investigations. This physiological approach allows observations, in the natural environment of a living tissue, of general or individual subpopulations of VSNs previously loaded with Fura-2AM, a calcium dye. This method is also convenient for studying any GFP-tagged pheromone receptor and is adaptable for the use of other fluorescent calcium probes. As an example, we use here a VG mouse line, in which the translation of the pheromone V1rb2 receptor is linked to the expression of GFP by a polycistronic strategy.