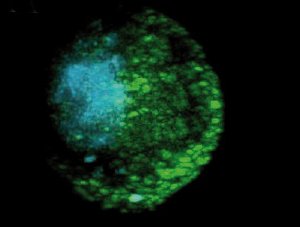 A New Challenge for Fluorescence Microscopy

The comprehension of stem cell biology and its molecular basis is now acquiring paramount importance in cancer research. The need to look at a single, possibly living, cell makes fluorescence microscopy and confocal microscopy invaluable allies in the study of stem cells.

The view of a tumor as an aberrant tissue whose growth and differentiation is sustained by cancer stem cells is now largely accepted for a wide variety of cancer diseases. Cancer stem cells, as their physiological counterparts, possess the ability to control their fate by maintaining themselves in a quiescent and undifferentiated state or by self-renewing to geometrically expand their number. The first situation leads to an asymmetric division which gives origin to two well different daughter cells. The first progeny is devoted to expansion by multiple cellular division and differentiation to generate the whole heterogeneous cell population composing the tissue (or the tumor). The second one does not enter the cell cycle and rests as a reservoir able to self-renew when requested. A typical stimulus involving the stem cell compartment expansion is, for example, the response to injury, e.g. repopulation of a damaged bone marrow in case of hematopoietic stem cells. In this second case, stem cells divide in a perfectly symmetric manner giving rise to two new cells with identical stem cell fate and proliferation potential.

The comprehension of stem cell biology and its molecular basis is now acquiring paramount importance in cancer research. However, the low representativeness of the stem cell compartment, e.g. in the order of 1 out 1,000 in the hematopoietic system, makes population averaging techniques, as the vast majority of molecular biology assays (just think of Western Blots) are inapplicable in most cases. The need to look at a single, possibly living, cell makes fluorescence microscopy and confocal microscopy invaluable allies in the study of stem cells.

The need to replace standard cell cultures with more representative assays in terms of biological complexity led to the development of three-dimensional cell culture techniques to produce in vitro biological prototypes of the different tissues and organs. In the field of breast physiology and pathology, the ability to reconstitute in vitro the mammary gland is measured by the formation of mammospheres (Figure 1).

In the past decades, there have been many significant scientific leaps to understand the nature of the human central nervous system. The most prominent of these findings involved the characterization of the chemical synapse, which describes a highly specialized compartment in neurons. Here, electrical impulses translate into a chemical signal to transmit information within a neuronal circuit onto a specific target cell. Through this signal translation, information can rapidly be modulated and processed by either strengthening or weakening the transmission efficiency.

Purified putative stem cells are plated at very low density on specific substrates and their growth observed by living cell microscopy. In a physiological situation, asymmetric division prevails with only one of the two daughter cells prosecuting with multiple rounds of divisions [1]. The transformed stem cell, as in the case of cells derived from the ErbB2 transgenic mice which express the activated ErbB2 oncogene in the mammary epithelium, abrogates asymmetric divisions preferring to give rise to multiple actively proliferating cells with self-renewal potential.

Asymmetric mitosis possesses a specific molecular signature characterized by a polarized three-dimensional redistribution of certain segregating determinants, proteins that are differentially partitioned between the daughter cells and contributing to determine their stem cell fate. The optical sectioning ability of a confocal microscope consequently becomes fundamental to reconstruct the volumetric localization of a polarity marker as shown in Figure 2. The extremely different signal distribution of the segregating determinant Numb in normal mammary (panel A) and cancer (panel B) stem cells confirmed that asymmetric division is lost upon transformation.

The tight link existing between stem cell fate and the physiological environment surrounding them (the stem cell niche) calls for imaging cells in living organisms or in fixed thick tissue slices maintaining the native histological architecture. As a consequence, two-photon microscopy is now massively entering the field. Nonlinear fluorescence excitation contribution could also be extremely relevant in in vitro studies. Mature mammosphere dimension can exceed 100 microns in thickness, representing a relevant challenge for conventional confocal imaging.

Studies on the Drosophila NMJ were performed to analyze the synapse structure and assembly [4] [5] [6] Presynaptic electron dense structures named “Tbars” (owing to their characteristic shape in electron micrographs) were shown to comprise Bruchpilot (BRP). BRP is thought to play a role in  signal transduction  by acting as a presynaptic scaffolding protein. Through the application of STED technology, in a synergistic combination with established imaging techniques, valuable information concerning the architecture of the roughly 250 nm size T-bar and adjacent structures was obtained.

From structure analysis to in vivo characterization

Besides increased penetration depth, the use of infrared pulsed sources for imaging provides superb performances in functional microscopy assays. Simultaneous absorption of two low energy quanta opens the possibility to excite fluorescence in the UV range, even at relevant depths, making visible and quantifiable the spatial distribution of a wide variety of endogeneously expressed metabolic products such as NADH, a relevant readout of the glycolysis activity of the cell. The ability to browse through the spectrum of emitted light  by spectral analysis allows to simultaneously quantify fluorescence from different molecular sources excited in the same light range as reported in figure 3 where NADH and flavin contribution were identified according to their photophysical properties.

Nonlinear microscopy can consequently represent a revolution in the field of stem cell biology, transforming the role of the microscope from a “simple” tool for purely structural analysis to a relevant and unique assay for the in vivo functional characterization of cells according to their self-renewal potential.

To reach this goal it is necessary to gain new ways to identify stem cells in environments of growing biological complexity considering their low representativeness. Mapping the metabolic activity of a stem cell requires to target a single (in normal mammospheres) or at best a few events (about 5 in tumor spheroids) [1] in a population of at least some hundreds cells whose number grows accordingly to the stage of maturation of the mammary gland prototype to be analysed.

Photoactivatable probes possess an enourmous  potential from this point of view. Specific variants of fluorescent proteins, e.g. paGFP, pamCherry, are scarsely fluorescent in their native form but, when illuminated with specific wavelengths, they undergo a structural modification that modifies their photophysical behaviour. Photoconverted molecules exhibit a tremendous increase in brightness producing a relevant optical contrast. Point-by-point illumination, typical of confocal microscopes, allows to spatially select target regions to be photoactivated. However, with the conventional confocal illumination, the control of photoconversion can be exerted in two dimensions only.

Focused Gaussian laser beams do not produce per se optical sectioning which is instead the result of the spatial filtering of the pinhole. The intrinsic optical confinement produced by nonlinear excitation grants instead the possibility to spatially modulate the extent of the photoactivation process in a selected volume [2]. The coupling of this unique feature with the increased penetration depth can provide a very efficient tool for cell targeting in complex biological samples.

The photoactivation process is not reversible and the increased fluorescence is maintained until the protein degradation occurs. Initial observations made on pamCherry-H2B histone fusion protein revealed that activation is maintained in cells for at least a few divisions. Two photon induced photoactivation can consequently be used to target selected cells even into a newly-forming complex structure as a mammosphere (Figure 4), thus obtaining an indirect readout of their proliferative activity and self-renewal ability through monitoring of the residual photoactivated fluorescence over time.