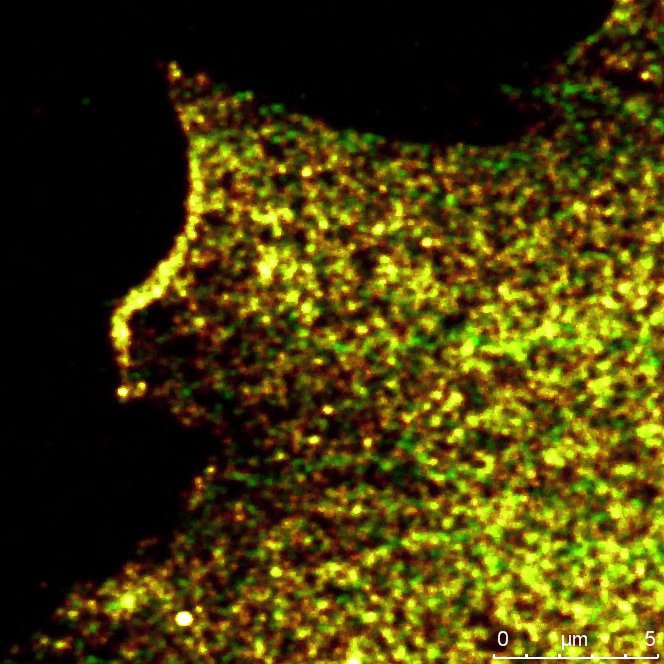 Stimulated Emission Depletion microscopy, or STED nanoscopy, is a technique that uses the non-linear de-excitation of fluorescent dyes to overcome the resolution limit imposed by diffraction encountered with standard confocal laser scanning microscopes and conventional far-field optical microscopes [1]. Compared to traditional confocal microscopy, STED offers exceptional improvements in resolution allowing visualization of cellular events at unprecedented levels. We analyzed the sub-cellular localization of the serine/threonine protein kinase AKT using both standard confocal microscopy and high resolution STED nanoscopy. AKT, also known as protein kinase B, plays a key role in multiple cellular processes such as glucose metabolism, cell proliferation, apoptosis, transcription and cell migration. We demonstrate the improvements of STED nanoscopy over confocal microscopy by probing resting and EGF-stimulated A431 cells with a monoclonal antibody specific for activated AKT and a polyclonal antibody specific for tubulin.

Tubulin is a ubiquitous globular protein that constitutes microtubules within cells. The dimers of α- and β-tubulin bind to GTP and assemble onto the (+) ends of microtubules while in the GTP-bound state. Tubulin dimers bound to GTP tend to assemble into microtubules, while dimers bound to GDP tend to fall apart; thus, the GTP cycle is essential for the dynamic stability of the microtubule. AKT is a well-studied intracellular signaling protein and is a member of the AGC-kinase famil< [2]. AKT possesses a pleckstrin homology domain which binds to membrane phosphoinositides with high affinity. This is useful for control of cellular signaling because the di-phosphorylated phosphoinositide PtdIns(4,5)P2 is only phosphorylated by the PI 3-kinase (phosphoinositide 3-kinase or PI3K) family of enzymes, and only after receiving chemical messengers which tell the cell to begin the growth process [3]. Once correctly positioned at the membrane via binding of PIP3, AKT can then be phosphorylated by its activating kinases, either phosphoinositide dependent kinase 1 (PDPK1) for phosphorylation at threonine 308 or mTORC2 for phosphorylation at serine 473. Phosphorylation by mTORC2 stimulates the subsequent phosphorylation of AKT by PDK1. Activated AKT can then go on to activate or deactivate a myriad of substrates via its kinase activity.

The Leica TCS STED (Stimulated Emission Depletion) imaging system is the first commercially available confocal microscope that integrates super-resolution to enable investigation of structural details below the 70 nm resolution range. Its super-resolution capacity allows imaging with a resolution two to three times higher than could ever be achieved in a conventional confocal scanning microscope [1]without the need of post-acquisition image treatments. We used two fluorochromes, ATTO 647N and Dylight™ 488, which exhibit fluorescent properties suitable for STED and for conventional scanning confocal microscopy. These fluorochromes were conjugated to secondary antibodies for indirect detection of the microtubule protein tubulin and the signal transduction protein AKT using tubulin-specific and activated AKT-specific antibodies to determine the subcellular temporal localization of these targets in both resting and activated A431 cells.

Conditions for STED nanoscopy: A431 cells (ATCC CRL-1555) were incubated at 37 °C with 5 % CO2 in DMEM (Invitrogen, MO) with 10 % FBS (Rockland, PA) and Pen Strep (Invitrogen, USA), in 75 cm2 Corning CellBind cell culture flasks (Sigma, MO) unless otherwise noted. At 70 to 80 % confluence cells were detached using TrypLE (Invitrogen, MO), and then placed on # 1.5 mouse laminin coated coverslips in 6 well plates and incubated in DMEM/FBS/Pen Strep for 1 h at RT. Once attached, the cell media was replaced by DMEM without FBS (serum starvation) and incubated for 15 h. The cells were either fixed directly using 4% paraformaldehyde (PAF) for 5 min at RT, or incubated with DMEM and with 100 ng/ml of epidermal growth factor (Millipore, MA) for 10, 15, 20 or 120 min. Cells were fixed after EGF treatment with 4 % cold PAF. Fixed cells were rinsed in PBS at RT followed by incubation in PBS/10 % normal Goat Serum/0.2 % Triton-X100 to block the cells.

The slides were examined using a Leica TCS STED imaging system using a 640 nm pulse laser to excite the ATTO 647N fluorescence and a Ti-Sapphire infrared multiphoton laser tuned at 750 nm as depletion laser for the detection of the ATTO dye in STED mode. The DyLight™ 488 dye was detected using a visible Argon 488 nm laser simultaneously or sequentially with ATTO 647N.

Evaluation of AKT activation and migration using STED nanoscopy
Confocal microscopy was used to detect the changes in AKT localization at low resolution. A Leica TCS SP5 was used to detect tubulin (cyan) and activated AKT (red) using PAb anti-tubulin detected with DyLight™ 488 Goat anti-Rabbit IgG and MAb anti-AKT pS473 detected with ATTO 647N Goat anti-Mouse IgG. The images in Figure 1 show a weak diffuse staining of AKT in serum starved resting cells and a marked activation and migration of AKT by 15 min to the periphery of the cells upon stimulation with the mitogen EGF.

Evaluation of AKT activation and migration using STED nanoscopy
A431 cells were serum starved and treated with EGF to activate AKT. Figure 2, panel A shows STED images (AKT p473 antibody, red channel) collected simultaneously with confocal images (tubulin antibody, green channel) on unstimulated, serum starved cells. Panels B–E show STED images for A431 cells stimulated with EGF for 10, 15, 20 and 120 min, respectively. The arrows indicate the region shown at higher magnification (lower panels). Cells deprived of serum show highly organized microtubules containing tubulin and low amounts of activated AKT which appears predominately at the periphery of the cells. Upon stimulation of cells with EGF, a rapid activation of AKT is observed (panels B–D) and a coinciding change in microtubule organization, as well as an extensive change in the shape of the cell is also noted. The later is evident in panel B which shows a cell with considerable membrane folding.

In panels B, C and D images are shown that demonstrate an accumulation of phosphorylated AKT pS473 at the periphery of the cell.  Panel C shows the greatest change in AKTpS473 intensity signal with a peak of activation at 15 min which appears to be colocalized with depolymerized tubulin (yellow signal). Panel D shows after 20 min of EGF stimulation that phosphorylated AKT and tubulin colocalization is limited to the cell periphery and appears to be associated with newly expressed pseudo-filipodia. However, after 20 min the level of phosphorylated AKTpS473 decreases considerably when compared with the 15 min stimulation. By 120 min of EGF stimulation the (panel E) the level of phosphorylated AKT pS473 is comparable to the unstimulated cells, however, microtubules do not appear to re-assemble or polymerize.

STED resolution compared with confocal resolution
The structure shown in Figure 3, left panel A (green) shows particles which cannot be resolved by confocal microscopy. The structure is differentiated and revealed as 4 distinct particles in panel B when viewed in STED mode (red). In panels C and D we show the resolution of AKT structures measured to be 62 nm at 10 min post EGF stimulation (panel D). After 20 min of EGF stimulation AKT particles sizes were observed to reach 300 nm or greater.

Stimulation of EGFR pathway in A431 cells leads to activation of AKT
Western blotting was performed in parallel with fluorescence microscopy to validate the activation of AKT. Western blotting was performed on A431 whole cell lysates. A431 cells were either unstimulated (–) or stimulated with EGF (+) for 15 min to activate EGF receptor (EGFR). All reagents were sourced from Rockland (Gilbertsville, PA). Blots were blocked with Blocking Buffer for Fluorescent Western Blotting (p/n MB-070).

Fig. 4: Western blotting was performed to validate the activation of AKT

STED (Stimulated Emission Depletion) microscopy allows for the investigation of structural details of cells below the 70 nm resolution range as demonstrated above. STED microscopy, in direct comparison with traditional confocal microscopy, permits the assessment of protein interactions not previously visible by conventional microscopic analysis. Algorithms allow for image deconvolution and particle size determination. Antibody reactivity observed in confocal images show temporal migration of AKT to the cell periphery upon EGF stimulation. Transient EGF stimulation is consistent with findings previously observed in cell lysates; therefore the migratory localization of AKT can be interpreted in context with the body of information available for AK T [4]. Tubulin is observed proximal to AKT and may facilitate its migration upon activation. The observation of tubulin associated with AKT migration is novel and warrants further investigation. Western blotting of AKT in parallel with cellular localization by immunofluorescence microscopy serves to a) validate the target of the antibody based on a MW assessment, b) validate the presence or absence of AKT in stimulated or unstimulated lysates, and c) validate the specificity of the antibody for activated AKT.

All experiments including immunocytochemistry of the slides and imaging on the Leica TCS STED were carried out by Myriam Gastard, PhD. at the Leica Microsystems Facility, Application and Technical Support Group, Exton, PA.