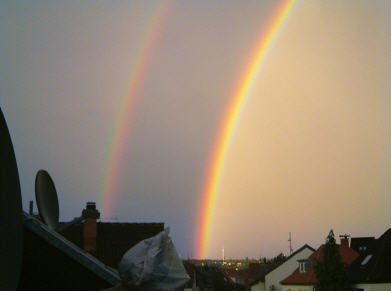 The 18th Century – Greater Demands are Placed on Optics

For millennia, glass was admired for its beauty and the artful objects that could be created with it. With the rise of the exact sciences, however, researchers became more demanding with regard to glass quality. Traditional glass was not suitable for microscope lenses – streaks, bubbles and inclusions containing impurities made precise observation impossible. It was also not possible to correct the aberrations (imaging faults) that resulted in lack of sharpness, color fringing and distortion. Such aberrations were the cause of many incorrectly interpreted observations, ultimately leading to a loss of interest in microscopy.

Chromatic aberrations (color faults) are noticeable as distracting color fringes along the edges of object structures. The reason for this is that white light consists of rays with a variety of wavelengths and focal points. When exiting a lens, light is broken down into its individual spectral colors, which are not focused on a single point.

Opticians, mathematicians and physicists all sought to correct these troublesome aberrations. Yet in 1729, it was an English lawyer, Chester Moor Hall (1704–1771), who created the first “achromat”, a lens that transmits light without separating it into its constituent colors. Other designers such as John Dollond (1706–1761) and Leonhard Euler(1701–1783) also built achromatic lenses, initially for use in telescopes only. It was not until 1770 that Jan and Harmanus van Deyl(or Deijl) created the first achromatic microscope objective, and in 1774, Benjamin Martin (1704–1782) first used an achromatic lens system consisting of crown and flint glasses in a microscope. The invention of microscope lenses which were free of chromatic aberrations finally made the microscope a valuable instrument for scientific observation.

Achromatic lens systems are made up of convex and concave lenses consisting of two different types of glass with different refractive indices. “Refractive index” refers to the refraction of light when it passes into a transparent material and specifies the material's optical density, e.g. 1 for air and 1.33 for water. The usual combination is a convex lens made of crown glass and a concave lens of flint glass. Crown glass has a high potash content and a low refractive index of around 1.6. Flint glass has a high lead oxide content and a high refractive index of up to 2.0.

The terms concave and convex are sometimes confused, but a simple mnemonic aid is to think of concave lenses as "caving in".

The mirror-maker Joseph Fraunhofer (1787–1826) was dissatisfied with the performance of his telescopes. He studied glass technology and succeeded in perfecting glass production, creating the world's best lenses and prisms. His performance earned him international fame and elevation to the nobility. Yet Fraunhofer had a difficult childhood: born the eleventh child of a master glazier, he was orphaned at the age of twelve and sent to Munich for an apprenticeship. The collapse of the three-story house of his master proved decisive for his future. The young Fraunhofer was buried under the rubble, but was saved after four hours of dangerous rescue work – exhausted, but unhurt.

Elector Maximilian IV, the subsequent King Max I, and the businessman Joseph Utzschneider were present during the rescue work. The Elector gave the boy 8 gold coins. Fraunhofer invested the money in a glass-cutting machine and began experimenting with optics. Utzschneider was pleased with the efforts of the ambitious glazier's apprentice and fostered his career. At the age of 22, he made Fraunhofer an associate in his optical institute in Benediktbeuern.

Fraunhofer’s work is very important for the further development of the optical industry. He discovered that optical flaws could be reduced by leaving a space between two lens elements, with the air gap acting as a third lens. He performed experiments on the spectral composition of light and discovered that he could reduce the dispersion of spectra by changing the glass composition of his lenses. However, Fraunhofer's health suffered due to his constant contact with toxic chemicals, and he died at the age of 39.

Read more about the History of Stereomicroscopy