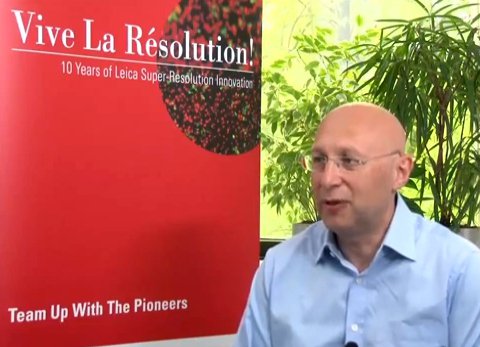 Video Interview with Stefan Hell, the Inventor of Super-Resolution

When we did this interview in June 2014, we hardly dared hope that Stefan Hell would be awarded the Nobel Prize. Today, the Nobel Commitee announced, that Eric Betzig, Stefan W. Hell and William E. Moerner have been awarded this year's Nobel Prize in Chemistry "for the development of super-resolved fluorescence microscopy". The Science Lab team congratulates the three winners!

Read more about this year's Nobel Prize in Chemistry: http://www.nobelprize.org/nobel_prizes/chemistry/laureates/2014/

And enjoy watching the video interview with Stefan Hell, in which he gives some personal insights into the success story of super-resolution microscopy:

Professor Stefan Hell is director at the Max Planck Institute for Biophysical Chemistry and head of the department of NanoBiophotonics in Goettingen and widely considered as the father of super-resolution. His inventions of 4Pi and STED microscopy were turned into the first commercial super-resolution microscopes available by Leica Microsystems in 2004 and 2007. Doing his PhD at Heidelberg Instruments which was later purchased by Leica Microsystems, he had the feeling that the only remaining interesting problem of light microscopy was the diffraction barrier. He was convinced, that there was a way to overcome this barrier and never gave up despite all the hardship of convincing people that breaking the diffraction barrier is really possible. His motivation to do this was curiosity and the conviction that there must be a physical way. However, he always knew that if he succeeded, this was going to be important. The first super-resolution image after his theoretical work naturally gave him pleasure and satisfaction. His personal relationship to the developers of Leica Microsystems from his time as a PhD student facilitated a lot the collaboration with the company for the development of the commercial 4Pi and STED microscopes. "That was a relationship of trust and understanding." He remembers the moment, when Leica Microsystems' R&D department had made the conscious decision about developing super-resolution because they had realized that in the end resolution is the most important property of a microscope. "I think, Leica was the first company to recognize that", remembers Hell. Future opportunities for super-resolutions techniques, he sees in the development of suitable fluorophores that allow different state transitions which is key to any current super-resolution technology. Naturally the most important application field for super-resolution is life science, but in his opinion there is also potential in material sciences. He also considers the field of tracking and following the diffusion of molecules in single cells or by correlation spectroscopy as very promising. Remembering the hardship he had to endure, Hell takes joy in supporting young scientists which have new, unrecognized ideas. Planning a career in science is not the right way, in his opinion. But one should have fun and a passion for science and work on problems that others may have overlooked.