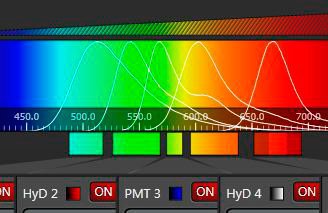 To separate multiple emissions by their color, light of different colors is first directed into different spatial directions [1] by beam splitters or dispersive elements. Before reaching the sensor, a band filter is introduced to minimize crosstalk or remove any residual excitation light. Classically, this task has been left to common glass-based bandpass filters. A revolutionary design uses photometer sliders in a multi-band assembly – the SP detector. This concept allows extremely efficient sensing of emission light and offers full tunability at the same time. A "side-dish" is the option to record spectral scans. When using a white light laser as light source, the tunable spectral detector is the only device that matches the spectral freedom of the tunable source. There are other spectral recording devices that are based on fixed bands by an array of detection elements, but they are non-tunable and less sensitive.

In the past, fluorescence microscopes were nearly always equipped with glass filters as barrier filters. The very early fluorescence microscopes were built as diascopic systems, i.e. they were operated in transmitted light. This technique was then completely substituted by episcopic beam paths (incident light). Incident light systems have a far better separation of excitation and emission, which is a crucial requirement as the fluorescence light is only some 10–4 … 10–10 times the illumination [2]. The barrier filter has to fulfill two tasks: firstly, to block as much parasitic light as possible (residual excitation light that reaches the detection path due to reflection in the sample or at optical components). Secondly, the barrier filter is used to further narrow the collected color band to enhance the specificity of the channel signal if the sample contains multiple fluorescent species (reduction of cross-talk).

Glass filters may consist of dyed glass material, which is available in many different colors. Nevertheless, the performance of dyed glass depends on the chemical compounds that are used, and there is no option for designing spectral properties other than mixing various chemicals to approach the desired transmission properties. Much more flexible in design are filters based on interference effects of multilayer coatings that are deposited on clear glass. Such coatings provide options for designing more or less any band pass within the visible spectrum. More complex coatings can serve as multi-band filters, featuring three or four bands of transmission with reflective sections in between, allowing multiple excitation and detection.

Although the art of multilayer coating is technically well advanced, the restriction of such devices is their intunability. To serve for a multitude of dyes and dye combinations, a system must be equipped with a collection of such filters that have to be inserted into the beam path as required, by either manual or motorized action. This makes the filter-based system extremely inflexible and slow to adapt.

Fig. 1: Classic band filters based on dyed glass or interference coatings. To change the detection band, the filter must be exchanged. This requires many filter glasses and a motorized exchanger device (© fotovika – Fotolia.com).

An entirely different approach for selecting the desired band from the entire spectrum is the use of mechanical devices, folded with the spectrum. If the light is passed through a dispersive element (prism or grating), the components are spread spatially depending on their energy. The energy of photons corresponds with the color. In a simple case, the resulting spectrum is visualized by projection onto a white surface. For a long time, photographic paper was used for documentation and quantification. Today, digital camera chips are implemented for viewing and analyzing spectra (spectroscope).

In order to measure the entire energy of an emitting species that is characterized by its color, one can open the slit and center it, so that the window covers the emission and rejects other parts of the spectrum. Such a device is a band filter, which has the advantages of  tunability in both center frequency and bandwidth – it comprises the potential of any (single-) band filter that could be designed within the given spectrum. In combination with an appropriate sensor (PMT or HyD), such a device is the most versatile detector for confocal microscopy (and the most sensitive as well).

As described so far, such a band spectrometer could serve for a single-channel experiment only. However, modern fluorescence in biomedical research requires recording of several channels simultaneously. The solution of this task was ingeniously solved by cascading mechanical slit devices [3]. In this multi-band detection system (further referred to as "SP detector"), the mechanical slit elements are represented as highly reflecting mirrors. The slit will transmit the desired wavelength band for the first channel, but the rest of the spectrum is directed, virtually without losses, to subsequent detectors that again have mirror sliders for band selection. Theoretically, an infinite number of such cascaded band detectors is possible. For practical reasons, the current devices feature up to 5 sensors.

The beauty of this concept is the high efficiency (slits transmit 100 %, mirrors 99 %) and the independent free spectral tunability of all bands. When illumination is performed with a white light laser (a tunable source), the SP-detector is the only device that sensibly rounds up the unlimited flexibility in excitation. Furthermore, each channel is equipped with its own sensor, allowing independent electronic amplification and baseline settings.

Fig. 2: SP detector employing a glass prism for high transmission and white performance. The spectrum is separated into bands by means of movable mirror sliders. These allow the spectrum to be split in any possible set of sub-spectra which are then recorded as detection channels.

After introduction of the SP detector, other designs were published that tried to match the benefits of the multi-band approach. One of these employs array detectors, usually multi-anode PMTs, onto which the spectrum is projected [4, 5]typo3/. Although these devices have the potential to increase the number of recorded signals more simply, they have significant drawbacks: the use of multi-anode arrays reduces the collected photons due to the necessary mechanical separation of the segments. They suffer from optical and electronic crosstalk, and they offer no way of individually adapting the amplification power. The bands are inherently fixed, i.e. not tunable and thus not adaptable to the various emission properties of the fluorochromes that are used today – with an ever increasing complexity in the future. The devices do not output signals that are assigned to individual emission species, but just fixed fractions of the spectrum. They therefore mandatorily require post-processing of the recorded data by means of unmixing algorithms to obtain meaningful channel data. (With the SP detector, the signals are assigned to the emitting species, unmixing is here an option to clear residual overlaps.)

Array detectors also mandatorily require  a spectrally linear dispersion of the emission. Therefore, it is not possible to employ prisms in systems with array detectors. For that reason, gratings are used, which have major drawbacks in performance. Gratings have no flat (white) output, but exert a maximum at the blaze wavelength. Data collected at longer and shorter wavelengths are therefore underestimated. Gratings are also strongly polarization-dependent, reducing the efficiency for non-polarized light (which is typical for biological fluorescence emissions) to some 50–70 % (at the best performing color). Attempts have been made to repair this flaw with additional optical elements [6]. A third problem of gratings is the fact that the input energy is not only released in a single spectrum, but also into the 0th order and higher orders of dispersed light. This reduces the overall efficiency in all gratings.  Here too, additional optical devices have been introduced to remedy this problem [7].

These devices are based on the idea of recording spectra. Nevertheless: fluorescence imaging does not require spectra to be recorded, except for very rare occasions. The inefficiently obtained spectra need to be recalculated to deliver meaningful dye information. The SP detector does not suffer from higher-order losses, nor polarization-dependence. It provides fully tunable detection bands, with individual amplification. It allows linear unmixing in case this is beneficial, and – as an added advantage – it can record spectra at high resolution as well [8]. And it rationally combines a tunable white light laser source with a tunable detection device. typo3/