Fluorescence lifetime imaging microscopy (FLIM) exploits the inherent properties of fluorescent dyes to produce an image. Fluorescent molecules have become essential tools for cell biologists. They are widely used in microscopy to visualize many different structures, targets and dynamic processes within cells, tissues, and even whole organisms.

Until recently, lifetime imaging was considered too slow, complex and expensive for everyday microscopy applications, especially those that involve live cell imaging. But all that is changing fast. With today’s advanced technologies, lifetime imaging is becoming faster and easier to use than ever before.

Lifetime information is independent of fluorophore concentration, so FLIM can be very useful for functional imaging in terms of investigating molecular function, interactions, and environment. Biosensors can also be exploited with FLIM to study cellular microenvironments. FLIM can be used to discriminate fluorescence probes that have overlapping emission spectra and eliminate unwanted background signals.

On this page, you will find a guide to all the questions you may have about FLIM, with links to relevant articles for further reading. Find out more about the basics of FLIM.

What are the applications of FLIM microscopy?

FLIM provides information that is not usually available with intensity-only data. Lifetime information can help life science researchers distinguish different fluorophores within a specimen, even if they have overlapping emission spectra. Fluorescence lifetime is independent of molecular concentration, unlike intensity, but it depends on the dye microenvironment, so FLIM allows dynamic changes of local environmental conditions within a specimen to be monitored.

Some popular applications where FLIM can help you gain new insights are:

Biomedical research applications with FLIM in combination with Förster resonance energy transfer (FRET) has also proven to be beneficial for investigating dynamic changes in cells. FRET allows molecular interactions, like those between ligands and receptors, proteins, or effectors and DNA, to be monitored.

Recent research on diabetes done with FLIM studied the defective maintenance of normal blood glucose levels caused by dysfunction of the alpha and beta cells in the islets. Multiphoton phasor-FLIM NADH autofluorescence imaging was used to detect metabolic changes of living islet cells before and after glucose stimulation. Increased oxidative phosphorylation in beta cells and suppressed oxidative phosphorylation in alpha cells were observed with phasor FLIM after glucose stimulation in healthy islets, but these were not observed in islets with type 2 diabetes.

There are a number of ways that FLIM can add depth to your current confocal experiments, including reducing the chance of artifacts in your image, differentiating the true signal from unwanted autofluorescence, and distinguishing more fluorophores with confidence.

Find out more about how to uncover the hidden dimensions in research with lifetime imaging.

Fluorescence is the spontaneous emission of a photon from a molecule or atom excited after absorption of light. If two fluorescent molecules (fluorophores) are very close together, a few nanometers apart, the energy can transfer directly from a "donor" to an "acceptor" fluorophore without an occurrence of light emission. This direct exchange of energy is called Förster Resonance Energy Transfer (FRET).

The greater the overlap of the fluorophores’ emission spectra the greater the probability that FRET occurs. Even the orientation of the molecules influences the transfer. FRET can be exploited to detect and study molecular interactions, like those between ligands and receptors, proteins, or effectors and nucleic acids, in cells.

Intensity-based FRET methods are quite susceptible to variations in the level of fluorophores present in specimens, molecular diffusion, specimen movements, and fluctuations in excitation. Fortunately, the combination of FLIM and FRET offers a big advantage when trying to overcome such limitations. When FRET occurs, there is a noticeable decrease in the donor's fluorescence lifetime which can even serve as a measure of the FRET efficiency. More information about combining FLIM and FRET.

The STELLARIS 8 FALCON from Leica Microsystems opens the door to biosensing and tracking of interactions between proteins, with FLIM information now available for all modalities. This innovative, integrated system enables researchers to follow fast molecular interactions via FLIM-FRET, use biosensors to detect changes in metabolic state and microenvironment, and apply lifetime contrast to separate multiple fluorophores. Moreover, the STELLARIS 8 FALCON solution gives researchers the ability to acquire FLIM data with minimal training.

The solution offers a new dimension of image contrast from fluorescence lifetime, which enables biosensing and the monitoring of even the faster molecular interactions via FLIM-FRET. It also allows researchers to utilize biosensors to detect changes in metabolic state and cellular environment, use lifetime to separate fluorophores.

Analysis with FLIM phasors provides a 2D visualization of lifetime components. The phasor analysis approach does not require any fitting. The graphical view of FLIM phasors enables any observer to distinguish and separate different lifetime populations rapidly and the interpretation of the distributions is straightforward. Multiple molecular species are resolved within a single pixel, as every species has a specific phasor. FLIM phasors allow you to follow changes in the cellular environment, select components for signal multiplexing, and determine FRET efficiency. 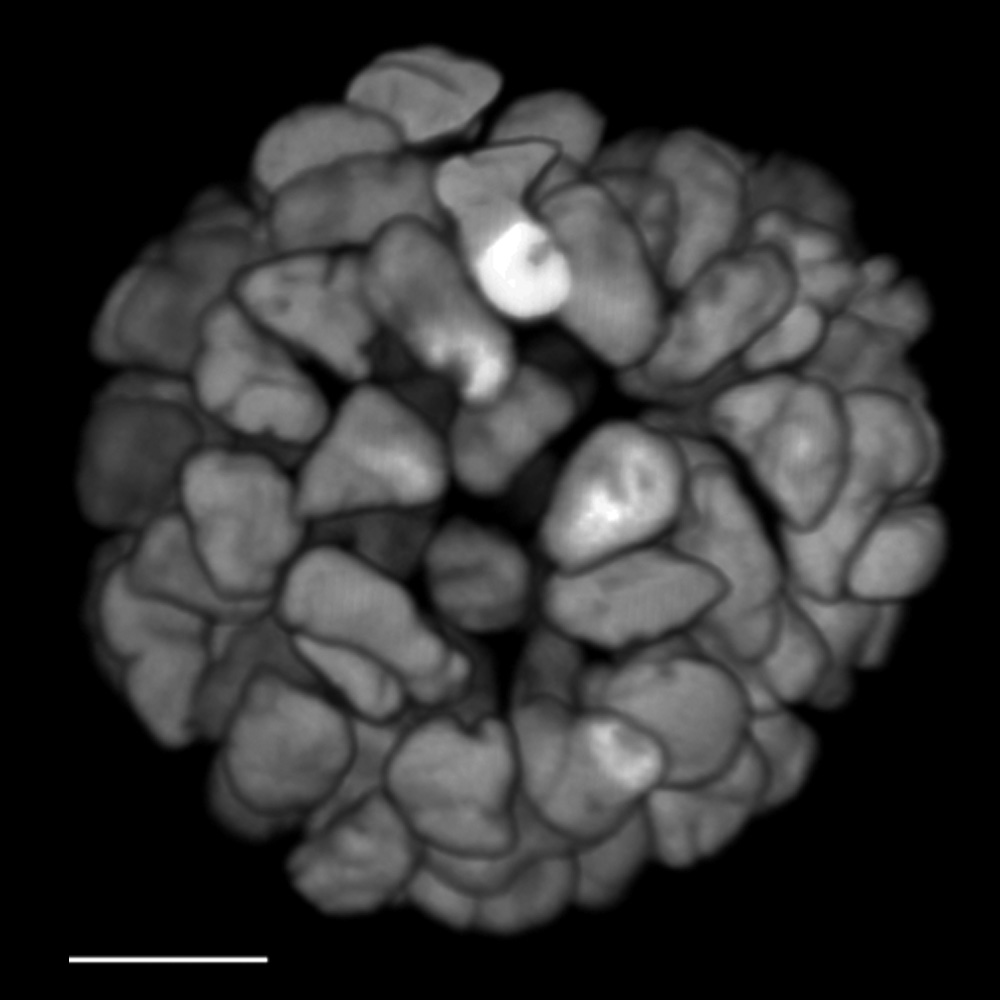 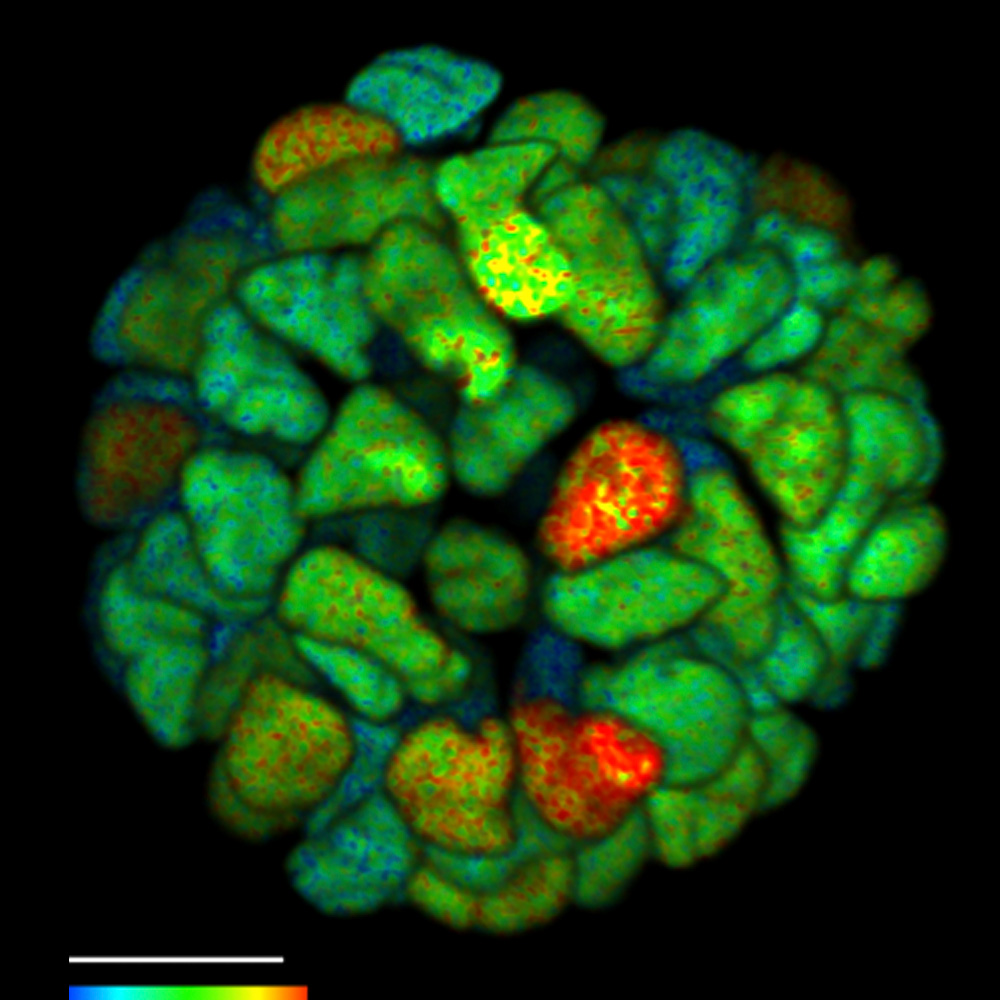 Video-rate FLIM with pixel-by-pixel quantification is achievable using the fast electronics and sensitive spectral hybrid detectors of the STELLARIS 8 FALCON system. Photon arrival times are recorded at count rates typical for standard confocal imaging. The system has ultra-short dead time and powerful built-in algorithms for data acquisition and analysis. Traditional time-correlated-single-photon-counting (TCSPC) solutions are intrinsically slow and difficult to implement, so FLIM imaging has been limited to experts and unable to deliver the speed needed to study biological processes faster than tens of seconds.

To obtain fast results, lifetime imaging has been seamlessly integrated into the full spectral flexible confocal imaging and processing tools of the STELLARIS 8 FALCON platform. The lifetime information is recorded as an extra contrast channel of a typical confocal image. Thus, recording FLIM data is now as easy as pressing a button.

The unique TauSense technology of STELLARIS allows you to extract an extra layer of information from every sample and increase the scientific impact of your research. TauSense is comprised of application-oriented imaging tools based on fluorescence lifetime that you can use to explore the function of molecules within the cellular context:

For more details about Tausense, refer to our application note published in Nature Methods.

How is FLIM used to study proteins?

With FLIM, dynamic changes of cellular environments can be tracked. So, the interactions between proteins and other biomolecules, like ligands, receptors, and nucleic acids, can be monitored in a living cell using FLIM.

How is FLIM used in the biomedical sciences?

Biomedical researchers are often interested in monitoring ions, proteins, biomolecules, and their interactions in living cells to understand dynamic processes. FLIM is a better approach for studying cellular dynamics than intensity-based fluorescence. Lifetime is independent of the fluorophore concentration, illumination intensity, and light absorption and scattering.